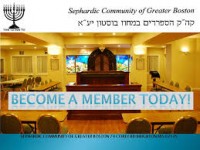 Fifty years after its founding, although the services and traditions of the synagogue continue in the Syrian-Egyptian style, the Corey Road synagogue is a landmark, which brings together Jews from all walks of life, spanning all the different countries of origin. European Sephardim, North African Sephardim, Middle Eastern Sephardim, Asian Sephardim, and Ashkenazim from all over the world, are all united to form what is today the Sephardic Community of Greater Boston

http://www.yibrookline.org/
The Young Israel of Brookline is one of the largest Orthodox congregations in New England. The co...